What Is Networking Intelligence? And, How It Can Get You Into A World Of New Opportunities

Guide to Networking Intelligence (NI): What Is it, How to Increase It 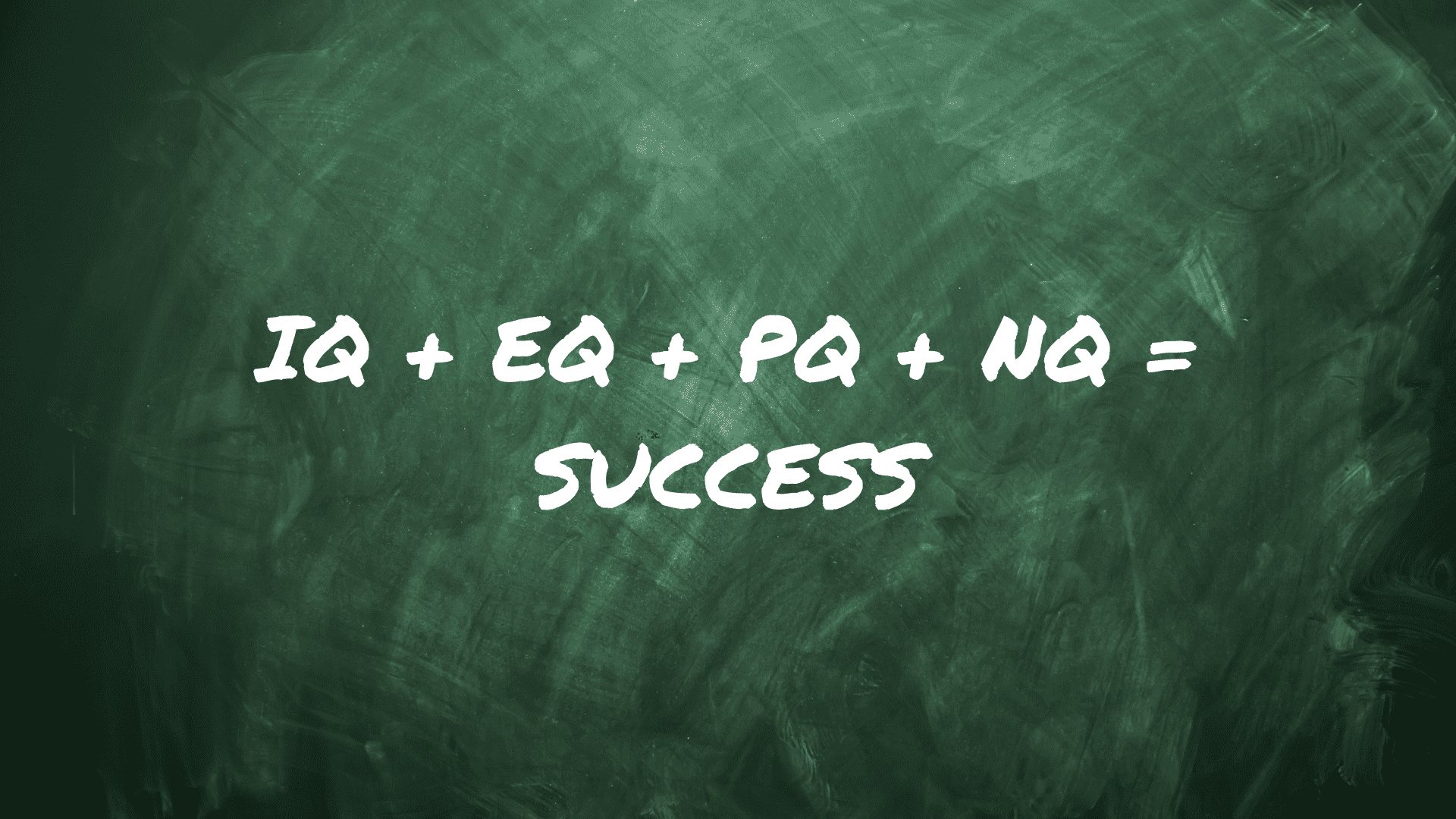 Now, before we get into that though, a full disclosure. The main intelligences that you’ll read about in this article are robust enough on their own to cover important life facets for effective socialization and survival.

Networking intelligence is similar to those big, broad intelligences for it’s vast overlap, but it’s not encompassing enough of a concept on its own to be considered a “main intelligence” yet.

So, think of it more as a “sub-intelligence” used to articulate the skill set of networking as well as to convey the extent of one’s intelligence within that given skill set. (And, you’ll understand more about what I mean as you read on.)

What Is Networking Intelligence?

Let’s start with a definition of networking intelligence:

Networking Intelligence: Networking intelligence (NI), or networking quotient (NQ), is the individual’s capability to recognize and influence patterns of social and power dynamics in order to achieve goals and acquire life-relevant resources such as status, influence, authority, and allies.

This definition includes both the “awareness” of social and power dynamics and the “competence” to influence those dynamics to achieve life-relevant goals.

The measure of networking intelligence is your “Networking Quotient” (NQ).

So when you hear or read that someone has a high “networking quotient,” that’s referring to people who have a good grasp of professional networking, and/or the skills and attitudes to influence professional relationships (there is overlap between simply knowing and understanding networking and one’s capability to actually go out and network effectively).

And, conversely, when you hear or read that someone has little or no networking intelligence, that’s referring to people who have either little or no grasp of networking, or little or no ability to actively network effectively.

As we saw from the definition, there are two major sub-components of networking intelligence: awareness and competence.

To better understand networking intelligence, we can further break down these two major categories:

Awareness: the ability to “see” and recognize social and power dynamics in interpersonal relationships, social exchanges, and life circumstances. It primarily includes the elements of awareness found within one’s social awareness, power awareness, and emotional awareness.

Feeling: the often unconscious “feel” for networking. It has the highest overlap with emotional intelligence and is what separates the “sleazy” networkers from the charming relationship-builders.

Analytical: the conscious side of awareness, including the more rational analysis of social and power dynamics. The analytical approach can be applied to both people, groups, or general life situations. People with a low “feel” can rely on more analytical analysis to reach goals.

Competence: the ability to change, shape, and influence social and power dynamics in order to achieve goals. It includes the drive, and attitudes that fuel action, and the skills that make those actions effective.

Attitudes: the mindsets, the willingness and, when required, the courage to take action. It includes personal drive, motivation, and grit. Inhibitors of actions on the opposite end include attitudes such as fear, self-doubt, low self-esteem, exaggerated conflict-avoidance, “doormat syndrome,“ and so on.

Skills: the ability to use and effectively execute appropriate techniques to influence social and power dynamics and achieve goals. 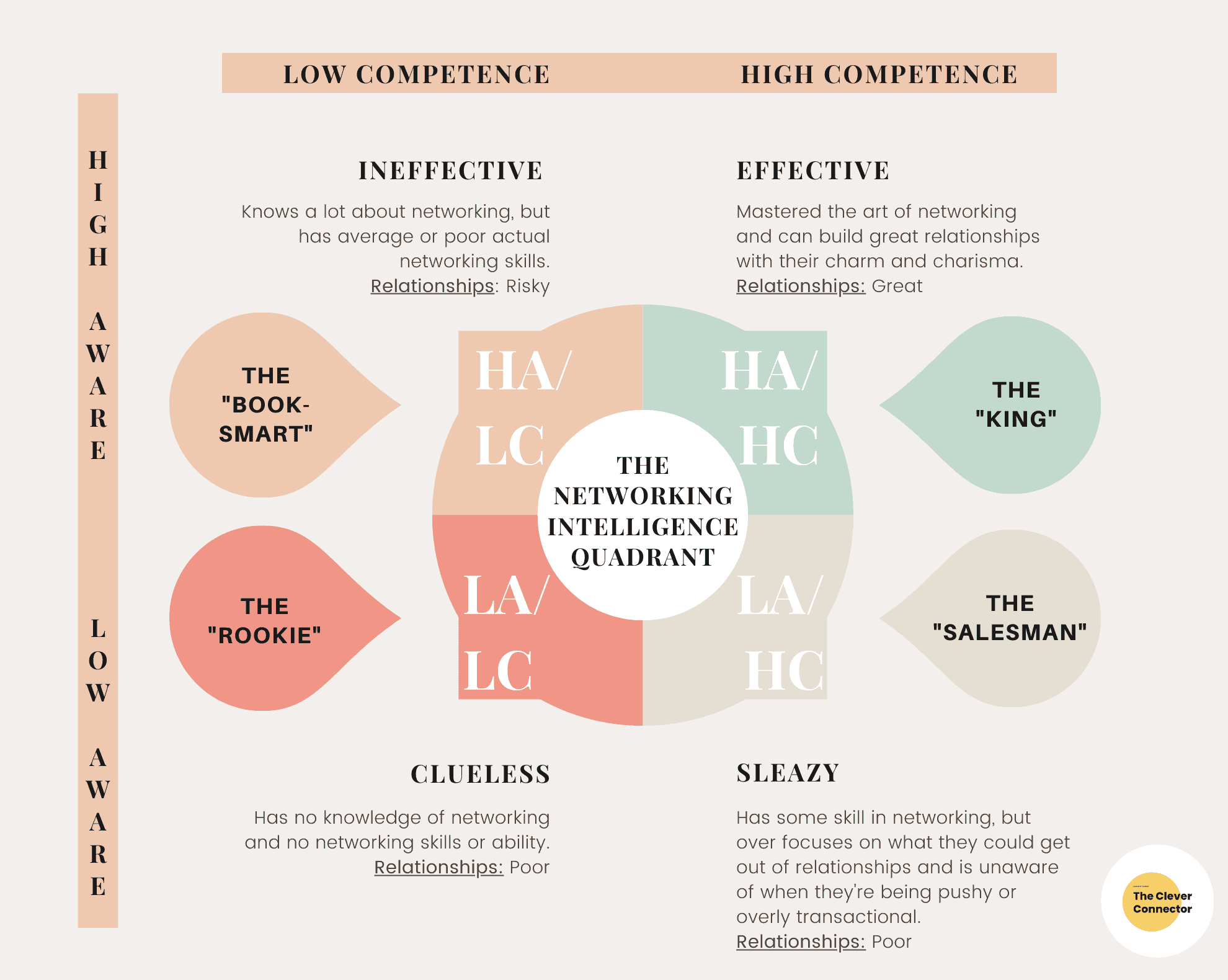 Behavior: Hesitant (good in low-stakes or casual situations, but can over analyze situations as the stakes grow and setting becomes more professional or “serious”)

Behavior: Charming (can naturally connect with people and help initiate collaborations that people feel glad to be apart of)

Behavior: Idle (doesn’t know enough about the importance of networking to bother engaging in it, so they’re inactive)

Behavior: Slimy (struggles to connect with people because they view people not as people, but as “customers” which leaves people feeling detached and distant)

Leadership: Poor (can acquire temporary allies if those people see benefit in what the networker is selling, but those relationships typically don’t last very long and rarely have enough social capital for the networker to ask for anything from them in return)

There’s a saying, “Networking is not for closing. It’s for opening.” And, these “salesman” types neglect to follow that rule, thinking first about closing sales and last about opening up opportunities for a deeper, genuine connection. 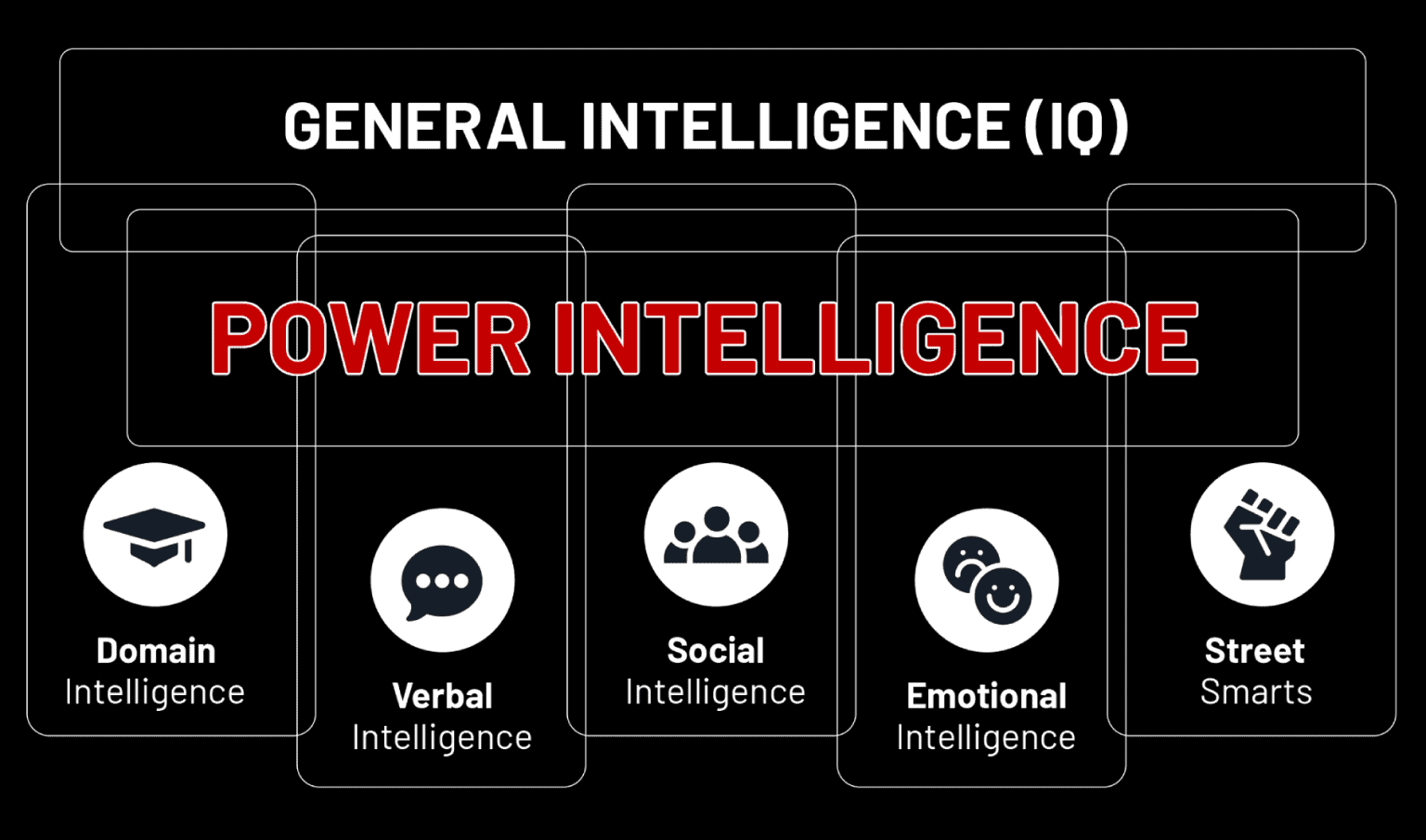 *Image provided by The Power Moves

Buffalmano: “There is a certain overlap among all intelligences [in the chart above]. Very low IQ people who are also great schemers (high PQ) and total life successes are rare. And intelligent folks (high IQ) who are clueless about power dynamics (low PQ) are rare (albeit less rare than the former).”

And, similarly, there is a certain overlap among all intelligences with networking intelligence as well.

Very low PQ people who are also great networkers (high NQ) and total life successes are rare. And, highly power aware folks (high PQ) who are completely clueless about how to build and manage relationships (low NQ) are also rare, all exceptions aside.

We already talked about its overlap with PQ. And, it may seem obvious that emotional intelligence is important for success in any social interaction, including interactions throughout any networking process.

But, how exactly does NQ overlap with the other intelligences?

As you can see from the chart, one’s IQ overlaps with all other intelligences.

And, it makes sense: highly intelligent folks (high IQ) who have no value to add in conversations while networking (low NQ) are rare if not impossible.

In being intelligent, that intelligence can be shared through the exchange of ideas with another person — which is a part of being a value-adding member of any professional network.

Your domain intelligence is your intelligence within your area of domain authority. Napoleon Hill refers to this as your “specialized knowledge.”

So, if you’re a professional graphic designer, graphic design is your domain. And, if you took the time to get very good, it’s also where you have specialized knowledge (domain authority).

The social exchange theory states that to get value you must give value, as a fundamental part of creating balanced exchanges and, therefore, balanced relationships.

Therefore, it’s not uncommon to see high domain intelligent folks (high DQ) sharing the value that they have to give from their domain. (An example would be, if we’re continuing from the example above, giving some free graphic design work to a contact to build a connection).

And, as a result, it’s not uncommon to see these types of people building balanced relationships because they’re seen as someone with value others want (which would be high NQ).

Indeed, what would be truly odd is someone with high domain intelligence and absolutely no networking potential, unless we’re talking about a domain nobody cares about (such as having specialized knowledge in growing ant farms).

“Verbal intelligence is linked to problem solving, abstract reasoning, and working memory.” All of which are important skills for diagnosing challenges your contact may be facing to identify areas where you can give value.

And, generally exchanging ideas and brainstorming with your contacts well.

A couple of simple definitions for you:

Simple Definition: “Emotional intelligence is the ability to understand, use, and manage your own emotions in positive ways to…communicate effectively, empathize with others, overcome challenges and defuse conflict.”

So, as with PQ, you will rarely find people who are very low in SQ who are also great networkers (high NQ) and experiencing all-around success in life. And, highly socially and emotionally aware folks (high SQ and high EQ) who are one hundred percent incapable of building and managing relationships (low NQ) would be even more rare.

Of course, there are exceptions to everything. But, focusing on the probabilities over all of the one percent chance possibilities, this general pattern among most people still stands.

And, social and emotional intelligence were grouped together in this one because they go so hand in hand.

Street smarts is about more than knowing your way around a situation. It’s also about having the healthy skepticism and hard-won experience and knowledge to be sure that you’re not being taken advantage of in an exchange.

Why Do We Need This New Subtype of Intelligence?

You may be wondering, if there is so much overlap between intelligences that already exist, what is the point of acknowledging a whole new subtype of intelligence? Why not simply refer to one of the more commonly known intelligences when the situation calls for it?

And for the more practically-minded thinkers:

Why do we need to increase our networking intelligence?

Buffalmano already noted that both EQ and SQ seem to offer little coverage for the more goal-oriented side of socialization, and that’s also for socialization within competitive environments.

That’s where PQ comes in. PQ covers the aspects of socialization that driven people need to master to see real results in their social and business lives, consistently. And, NQ builds on that with its focus on the application of the intelligences to the achievement of goals that require social strategy (and the clear execution of those strategies with effective techniques).

2. NI Is Simply Its Own, Discrete Function

We can have emotionally intelligent individuals who are also socially adept, but lack networking intelligence because they’re unsure of how to form social strategies to connect with strangers and build fruitful, collaborative, lasting relationships with them.

These types of people are great to be around and can easily make friends with the intelligences they have, but without networking intelligence, they’ll miss out on opportunities to reach top positions of power and authority.

Networking Intelligence Is Important for Leaders

High-quality individuals in leadership positions must have the ability to acquire status, resources, and allies in order to remain effective, high-quality leaders.

And, networking intelligence is important for empowering one to be able to build relationships with powerful allies one may not already personally know.

The very top-ranking positions and number one spots in life are often already secured by someone in that position — and further secured by a gatekeeper.

Many think to compete with the person at the top in order to take their spot. Very few think that the powerful people at the top you might think you have to compete with are the very same people who can be (and who you want to be) in your corner when the tides of life catch you with your pants down.

And, more than covering yourself in times of need, but collaborating with these powerful people to grow your own status and power for a straight shot to the top. With networking intelligence, leaders can achieve more in far less time than it might’ve taken competing with everyone above them.

And, networking intelligence is very important for the leaders who want to go far.

How to Develop Networking Intelligence

Finally, we get to the solution for those of you who aren’t yet at a position in the Networking Intelligence Quadrant that you want to be in.

How do you develop your NI?

Let’s go for a brief overview:

Networking Intelligence refers to the cognitive skills and abilities to understand and influence professional relationships.

Since there is inherent competition for almost everything that everyone else wants, networking intelligence is one of the most important types of intelligence to achieve your goals, succeed in life, and successfully deal with others.

In this article, we explained what networking intelligence is, and why it is its own discrete sub-modality of intelligence.

This article goes hand-in-hand with another article written by sociologist, Lucio Buffalmano, on power intelligence: